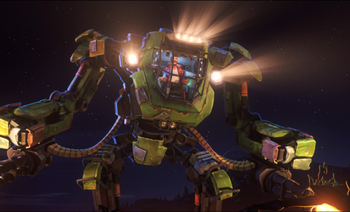 "Lock and load, boys. It's time to see what you're made of."
Advertisement:

In rural farmland, a group of farmers protects their territories from monstrous invaders by fighting them in mechanized suits. Based on the short story of the same name by Steven Lewis.