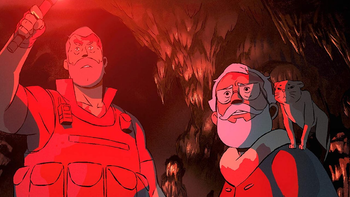 "There's a fucking monster out there, and it was gonna eat our asses."
Advertisement:

A group of mercenaries at an archaeological digsite unleash Dracula.

Scott Whyte voices Simon and Fred Tatasciore voices both Flynn and Dracula. Based on the short story of the same name by Kirsten Cross.