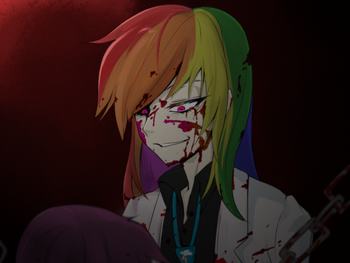 Come now, children. Those rainbows ain't gonna make themselves.
"Now a rainbow's tale isn't quite as nice as the story we knew of sugar and spice
But a rainbow's easy once you get to know it, with the help of the magic of a Pegasus Device"
Advertisement:

A pair of young pegasus ponies, Scootaloo and Orion, are getting ready for their final flight exam, which will either make their lives if they succeed, or break them if they fail. But during the exam, a pony twists her wings and catastrophically crashes before their eyes. A chain of events leads to all three of them failing the exam and being taken somewhere unknown, where the glorious city of Cloudsdale won't have to suffer failures such as them.

But the exile turns out to be even worse than expected... Instead of being deported to some unknown land, the three find themselves inside the Rainbow Factory. Barely anything is known about the workings of this place, besides the fact that it produces rainbows. But now, the three are finally about to find out at the price of their lives where those beautiful rainbows gracing Equestria really come from... and to discover the horrifying truth behind Scootaloo's mentor, friend and hero... Rainbow Dash.

And Celestia help them all.

was first written as a My Little Pony: Friendship is Magic-themed song by renowned brony musician Glaze, aka WoodenToaster. While it clearly suggests the cheerful Rainbow Factory depicted in the show is not all it seems, it leaves the actual details to one's imagination. Aurora Dawn later wrote a fanfiction based on the song. This contains canon character reinterpretation (as well as death) and is very grimdark.

and the fanfic here.

Much like Cupcakes (Sergeant Sprinkles) before it, there's also a dose of Nightmare Retardant in a parody here,

courtesy of My Little Pony: The Mentally Advanced Series.

about a duo of foals trying to escape the factory as things begin to go wrong in there. The sequel is arguably Lighter and Softer than Rainbow Factory was, and adds a degree of philosophical depth to many of the antagonists.

set in an Alternate Universe where Scootaloo passed the exam and got a job at the factory, Ask Rainbow Factory Dash,

a blog about the manager of the factory in the same continuity as the Scootaloo blog, and Frenzy of the Rainbow Factory

, an OC blog in continuity with the previous two. Ask Ghostly Scootaloo

is revealed to follow an ending where Scootaloo is killed immediately, rather than being imprisoned. In a crossover between Ghostly and Factory Scootaloo, they end up in what could probably be defined as the "Alpha" universe with the imprisoned version of Scootaloo from Rainbow Factory canon.

is a Doom mod where you control Scootaloo trying to escape the rainbow factory.

"You have beautiful eyes..."