Fanfic / Rainbow in the Dark 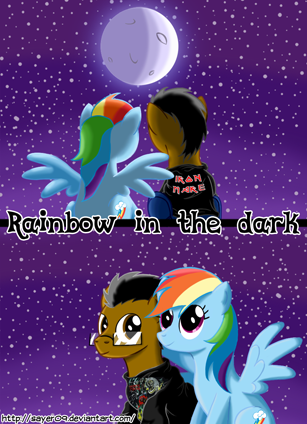 Rainbow in the dark

is a My Little Pony: Friendship Is Magic fanfiction story describing the romance between Rainbow Dash and Brownie, a new pony who recently moved to Ponyville. At first Brownie and Rainbow Dash act like friends, but it doesn't take long before the main character develops a crush on Rainbow Dash. Brownie soon finds himself trying to fit in a town full of crazy ponies while trying to win her heart in the process. Not to be confused with the famous song by Ronnie James Dio.

Sayer and Kalash93 said that it is possible that Rainbow in the Dark exists in the same universe, although perhaps not in the same continuity as Racer and the Geek. Small nods, links, and references are present. This is still completely nebulous.

. Warning: This story is NSFW. Read under your own judgment!

Also comes with the side story Hitmane: Agent 3.14.

This fanfic doesn't have any relation with the popular song by Ronnie James Dio aside from the title, though the author confirmed that it was inspired by the song.

Rainbow in the Dark and its spinoffs provide examples of: