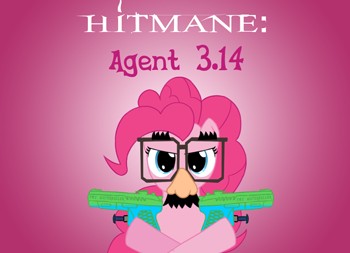 She's here to prank and chew bubblegum,and she's all out of gum.
Cover drawn

is a My Little Pony: Friendship Is Magic fanfiction parody of the Hitman series with Pinkie Pie playing pranks on ponies via contracts done by a mysterious agency.

Hitmane is the most famous prankster of Ponville, a legend. Somepony capable of pulling off the most contrived and impressive pranks in the blink of an eye and always two steps ahead of the police thanks to her bizarre disguises, deemed too weird and crazy to be considered true. Her pranks always succeed in making fun of her victims, but her services aren't cheap. Agent 3.14 always asks for the same two things: A lot of bits, and some candies.

Hitmane: Agent 3.14 is part of the Rainbow in the Dark universe written by the same author. This story contains a cameo by the main character but there's no spoilers related to the original story nor is it needed to understand the story.