Film / Days of Wine and Roses 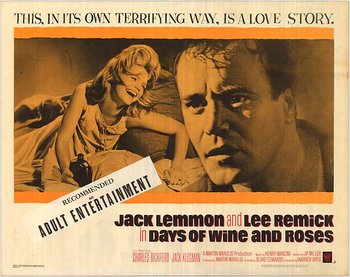 From Blake Edwards — the director of such future comedy classics as The Pink Panther, The Great Race, and The Party — comes this harrowing, heartbreaking 1962 drama about the destructive nature of alcohol addiction, adapted from a 1958 Playhouse 90 teleplay and starring Jack Lemmon and Lee Remick.

Joe Clay (Lemmon), a San Francisco public relations executive and "social drinker", meets Kirsten Arnesen (Remick), his boss's secretary. At first they don't get along very well, but after a date where Joe introduces the teetotaler Kirsten to alcohol, they find themselves falling for each other. Eventually they get married, have a daughter and a supposedly comfortable life. Supposedly, because the stress in their lives prompts them to start drinking more frequently and slowly begins to affect their lives and those of everyone who's close to them, including Kirsten's stern-but-loving father (Charles Bickford). Things start to go downhill from here.

Before Requiem for a Dream became a hit by depicting substance abuse in a very disturbing way, Days of Wine and Roses already did it almost 40 years earlier, albeit with less Surreal Horror.

This is also the film that made Jack Lemmon, emblematic protagonist of the hilarious Some Like It Hot and the heartwarming The Apartment, an acting force to be reckoned with in heavy drama as well as comedy.

Days of Wine and Roses contains examples of: