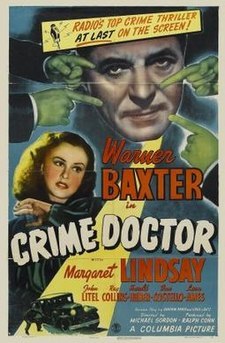 Crime Doctor (1943) is a crime film adapted from the radio series of the same name. The film stars Warner Baxter as a man with amnesia determined to remember his past. The film was released by Columbia Pictures.

Nine sequels followed, all starring Baxter. These later movies were somewhat more conventional mysteries than the original film. Baxter finished his career with the series, which was relatively easy work for him having suffered a nervous breakdown and severe arthritis. He died two years after the final "Crime Doctor" movie.

Amnesia victim, Robert Ordway, becomes the country's leading criminal psychologist. When confronted by mysterious figures from his unknown past, he becomes obsessed with learning about his past. Eventually, his memories return and he learns that in his past life, he had been a criminal mastermind.