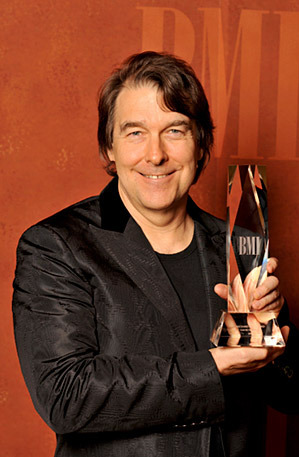 No, that isn't Jerry O'Connell.
Advertisement:

David Louis Newman (born March 11, 1954) is an American composer. Born in Los Angeles, he played piano and he played violin as a child with the Santa Monica Symphony. He studied and earned degrees in orchestral conducting and violin at the University of Southern California, then worked as a studio musician and free lance conductor. From 1977–1982 he worked extensively in the motion picture and television industry as a violinist, playing on such films as E.T., Twilight Zone – The Movie, and the original Star Trek film.

David was only fifteen when his father, Alfred Newman, died of emphysema. After graduating from USC, David began listening to hours of his father's compositions. He said, "It planted a seed in me that eventually came to fruition." Says David, "My father was a huge influence on me in all aspects of music and in the whole idea that you could get everyone together to do something extraordinarily beautiful. The collaborative and the performance and the music all rolled into one."

In his 25-year career, he has scored over 100 films, ranging from Bowfinger and Heathers, to the more recent The Spirit, Serenity, Behaving Badly and Tarzan (2014). Newman’s music has brought to life the critically acclaimed dramas Brokedown Palace and Hoffa; top-grossing comedies Norbit, Scooby-Doo, Galaxy Quest, The Nutty Professor, The Flintstones, Throw Mama From the Train; and award-winning animated films Ice Age and The Brave Little Toaster and in 1997 he was nominated for Best Original Music Score, for the animated feature film Anastasia. David is a frequent collaborator with actor/director Danny DeVito. He has scored Throw Momma from the Train (1987), The War of the Roses (1989), Other People's Money (1991), Hoffa (1992), Matilda (1996) and Death to Smoochy (2002). He has also scored the comedies, The Flintstones (1994), The Mighty Ducks (1992), The Nutty Professor (1996) and Bill & Ted's Excellent Adventure (1989).

Newman is also a highly sought-after conductor and appears with leading orchestras throughout the world, including the Los Angeles Philharmonic, Royal Philharmonic Orchestra, The Boston Symphony, The Philadelphia Orchestra, The Chicago Symphony and the New York Philharmonic. He has led subscription weeks with the Los Angeles Philharmonic at Walt Disney Concert Hall and regularly conducts the Hollywood Bowl Orchestra at the Hollywood Bowl. He is currently on a mini tour performing live with orchestra the movie West Side Story in major orchestras in the US and abroad. He just premiered the movie Home Alone with the Cleveland Orchestra. Newman also conducts the annual movie night at the Hollywood Bowl. He also conducted James Horner's score for Battle Beyond the Stars.

Also an active composer for the concert hall, his works have been performed by the Los Angeles Philharmonic, Indianapolis Symphony, Long Beach Symphony, and at the Ravinia Festival, Spoleto Festival USA, and Chicago’s Grant Park Music Festival. He also composed a violin- orchestra suite for Sarah Chang based on the songs from the Broadway hit, West Side Story. Newman has spent considerable time unearthing and restoring film music classics for the concert hall, and headed the Sundance Institute’s music preservation program in the late 1980s. During his tenure at Sundance he wrote an original score and conducted the Utah Symphony for the classic silent motion picture, Sunrise, which opened the Sundance Film Festival in 1989. As a tribute to his work in film music preservation, he was elected President of the Film Music Society in 2007, a nonprofit organization formed by entertainment industry professionals to preserve and restore motion picture and television music.

Passionate about nurturing the next generation of musicians, Newman serves on the Board of the American Youth Symphony, a 43- year-old pre- professional orchestra based in Los Angeles, where in 2008 he launched the three-year "Jerry Goldsmith Project,” which explored the film music of composer Jerry Goldsmith in context with symphonic music. The last 2 years have been devoted to the film music of Danny Elfman. In 2007 Newman wrote the children’s melodrama Yoko and the Tooth Fairy for Crossroads School in Santa Monica, California, and in 2010 he served on the faculty of the Aspen Music Festival in the Film Scoring Program. Newman is also on the Board of Governors of the Motion Picture Academy of Arts and Sciences. When his schedule permits, he visits Los Angeles area high schools and universities to speak about film scoring and mentor young composers. He was the first composer to have his piece, 1001 Nights, performed in the Los Angeles Philharmonic’s FILMHARMONIC Series, conducted by Esa-Pekka Salonen.

He, along with his brother Thomas, cousin Randy, father Alfred, and uncle Lionel, have their own page dedicated to their wonderful music.