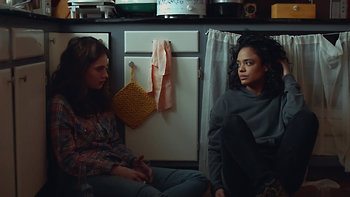 On the left, Deb. On the right, Ollie. In the middle, a whole lot of anxiety and secret crimes.
Advertisement:

In North Dakota, biracial half-sisters Ollie (Thompson) and Deb Hale (James) have run into problems. Ollie has completed her probation following her arrest for drug dealing, but isn't making enough on selling coffee and meals to avoid the foreclosure on her home. Deb is pregnant again, and she and her son have nowhere to live out of their unregistered mobile home. With just a week left on their deadlines, the two hatch a plan to make up everything they owe in as little time as they can, even if it might take drugs, shady deals, and a risky trip across the Canadian border.