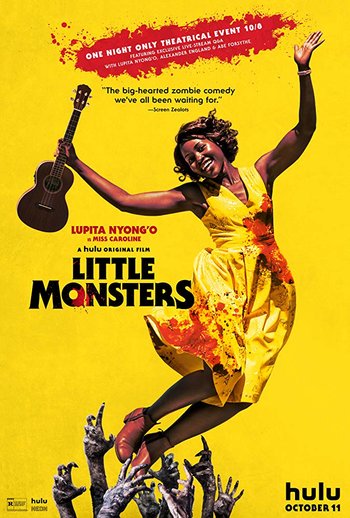 Little Monsters (2019) is an Australian Horror Comedy zombie film directed by Abe Forsythe and starring Lupita Nyong'o, Andrew England, and Josh Gad. The film follows Dave, a down-on-his-luck loser who volunteers to chaperone his nephew Felix on a school trip to a petting zoo in an effort to get closer to his teacher, Miss Caroline. Unfortunately, the United States Army base next door is running genetic experiments that have resulted in a zombie outbreak. When the zombies descend on the petting zoo, Dave and Miss Caroline find themselves trapped with egotistical children's entertainer, Teddy McGiggles, and must desperately work together to keep the children safe and ignorant of the danger around them.

Has nothing to do with the 1989 film Little Monsters.