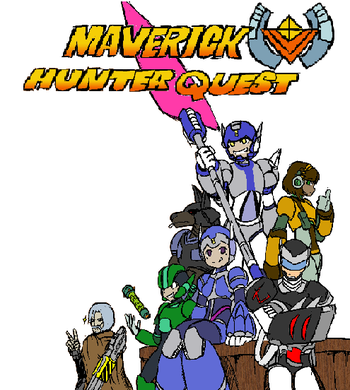 Welcome to the Fourth.
note Left to right, from the top: Anode, Schwarzhund, India, Chernyee Grach, Emerald, Cathode, and Seven.

A quest/group-game on 4Chan's /qst/ board involving missions and adventures in the Mega Man X universe.

You are Anode, A-Rank Hunter with the Maverick Hunters 4th Overland Division, and crazy awesome things are about to go down. Set in the time period between Mega Man X2 and Mega Man X3, Maverick Hunter Quest follows an original character newly assigned to the ground forces of the Maverick Hunters, his new colleagues, their crazy base life and the missions they undertake.

Full of colorful characters with distinct personalities, Maverick Hunter Quest takes on Gameplay and Story Segregation and fleshes out the world of Mega Man X from the perspective of Reploids, their lives and lifestyles, and the tangible impact of Maverick attacks. Chock-full of Fanon created to support this deepened world, it's notable for having a high quality of storytelling and an oft-warped sense of humor. MHQ has even spawned fanart, which occasionally decorates threads alongside copious memes.

The threads are archived

for easy reading, and while the update schedule has been erratic, MHQ is always a welcome sight on /qst/ and has regulars who eagerly contribute to the madness.