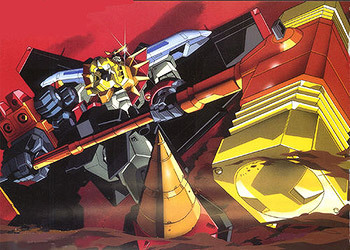 Hammers used in battle. They come in different sizes, from squeaky mallets to giant sledgehammers. The lighter ones inspire laughs, while the bigger ones inspire terror. Some are thrown, but most are used to pound things into a bloody smear in the ground. It sometimes comes with Shock and Awe due to a certain god of thunder. Might be a Rocket-Powered Weapon, especially if it’s so preposterously heavy that even a super-strong wielder can’t swing it without assistance.

Used by The Big Guy, the Mighty Glacier, and the Cute Bruiser. Also a favorite of clerics in High Fantasy settings, smashing someone's head in with a hammer often lets them get around the "no spilling of blood" rule enacted by their gods. note  Blunt damage can easily cause bleeding. Imagine breaking a bone with a hammer: there will be blood involved. This also ignores internal bleeding, which heavy impacts readily inflict.

Historically, blunt force weapons like maces, hammers, and flails were far more effective against heavy armor than blades because of their ability to transmit force through the armor to the flesh and bone underneath. War hammers appeared in Europe during The Late Middle Ages to combat plate armor. They usually featured a pick-like beak on one side that could pierce some of the thinner plates, and a hammer head on the other for inflicting blunt trauma to targets such as the head; this part often featured claw-like prongs or a texture resembling a meat tenderizer to help it bite into the armor's surface instead of glancing off. Either end could also be used as a hook to control an opponent. A one-handed warhammer used a relatively small head around the size of a modern claw hammer’s, relying on the top-heavy balance and the acceleration provided by a long handle instead of excessive mass.

You will often see hammers used in fictional combat that have very large steel heads like sledgehammers, and which would be impractically cumbersome and stamina-wasting in real combat where the enemy isn’t just going to hold still and let you whack them with all your might. English archers did use large mauls for driving stakes as improvised weapons, but these maul heads were so large because they were made of wood, which isn’t as dense as steel. There's no denying that big freaking hammers have visual impact, and imply Super Strength or Charles Atlas Superpower when used. What’s funny is how they’ve become so popular that The Coconut Effect has set in, to the point where if you showed a fantasy character with a realistically-sized warhammer the audience would think it looked too small.

It is fairly common for characters who use sledgehammer-types as their weapon of choice to be Black, probably due to the influence of American folk hero John Henry and the African demigod Makoma.

This trope also covers smaller handheld hammers. While they aren't as big and intimidating as War Hammers or Sledgehammers, they are still something to be afraid of as they can crack skulls just fine as their bigger brothers. Claw Hammers and Mallets are especially popular with this in mind. In fact when using claw hammers, the other end of it which is the eponymous "claw" can be used like a pick to just straight up stab somebody with it. Just like how the other end of some war hammers have pick-like beaks.

See also the Hyperspace Mallet, the Weapon of Choice for cartoon animals seeking to inflict Amusing Injuries (as well as the angry Anime female's favorite tool against perverts and other sources of irritation). Also see Carry a Big Stick for other kinds of bludgeoning weapons. Not to be confused with When All You Have is a Hammer…, although you can achieve this with a hammer if it's the only thing you have to work with. Also not to be confused with the slang term for driving at top speed (which originated among truckers who, after putting the pedal to the metal, used to use a heavy hammer to keep it there in the years before cruise control became a standard feature). Hammer and Sickle when paired with Sinister Sickle. Thunder Hammer is what happens when this trope is paired with Shock and Awe.

The Hat of Discipline

Rolf drops a comically oversized hat with a large hammer on it to penalize Edd.

The Hat of Discipline

Rolf drops a comically oversized hat with a large hammer on it to penalize Edd.