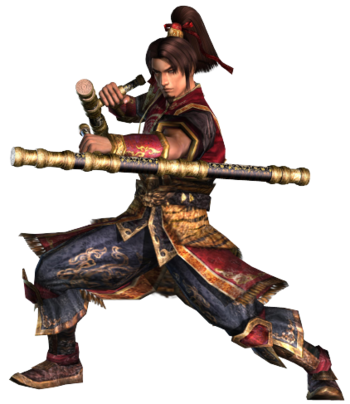 The tonfa is basically a heavy stick with a handle attached near one of the ends, typically a little longer than the user's forearm. This weapon is Boring, but Practical made manifest. However, boring isn't good enough for fiction, and naturally all sorts of variations (including the bladed tonfa, the energybeam tonfa, and the tonfa that doubles as a gun among others) have been envisioned by writers in order to spice up this humble handled club.

Wielded in pairs with one in each hand, a martial art based on the use of dual tonfas (Kobudo) exists in the Japanese islands of Okinawa. Archaeological evidence suggests the first tonfa were of Chinese or Indonesian origin, but they enjoyed much more widespread use in Okinawa and other Japanese islands. There it was claimed to have been developed from a modified millstone handle as a result of the restriction of conventional weapons by the rulers of the land back in the day, forcing people to make their own weapons, often out of farm tools.

They are a staple in weapon based fighters, and in any anime or manga where all kinds of weapons are already around they will often turn up somewhere down the line in the hands of a character, usually either a competent part of the hero's team or a major threat to the protagonists.

In real life, the common policeman's Lawman Baton is based upon this weapon, and in the end is just a modified version. It is preferred over regular batons because it is better for defense and looks less threatening. The main differences between them is that police use just one nightstick whereas with tonfas Dual Wielding is the norm, and that police forces usually don't train in the full use of the tonfa like martial artists do.

Might overlap with examples of bladed weapons that otherwise are tonfa shaped (along the arm). Such examples can potentially be found as type 3 of the trope Blade Below the Shoulder.

Examples are users unless stated otherwise.

Two of his weapons, made out of sushi rolls.

Two of his weapons, made out of sushi rolls.