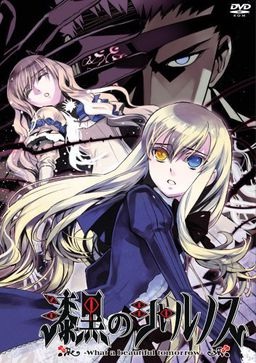 Come here... that is, if you still haven't given up.
Advertisement:

The third in the series of Visual Novels including Sekien no Inganock, Shikkoku no Sharnoth takes place in an alternate reality Victorian Era London. Before the current young generation was born, England made contact with the advanced society known as Kadath and began trading Engine Machine technology. This technology has allowed England to become the dominant world superpower and appears to have allowed Queen Victoria to live years past when she would have died in our world.

Our protagonist, Mary Clarissa Christie is currently attending university with her friends Charlotte Brontë and Angelica Derleth, happily spending their days as normal students. Only... Charlie has been a little off lately. When Mary tries to find out what is bothering her, she finds herself thrown into a dark version of London with no one in it. No one in it but her and the monster that wants to take her eye, that is. Eventually, she is saved by a strange man in black and swears a contract with him in order to return to her normal everyday life.

Shikkoku no Sharnoth contains multiple references to Sekien no Inganock and is crammed full of figures from around the Victorian Era, whether they were alive then, or not. We're looking at you, Heinz Heger and Charlotte Brontë. We're pointedly overlooking you, George Lestrade and Sherlock Holmes.