Film / Don't Go in the House 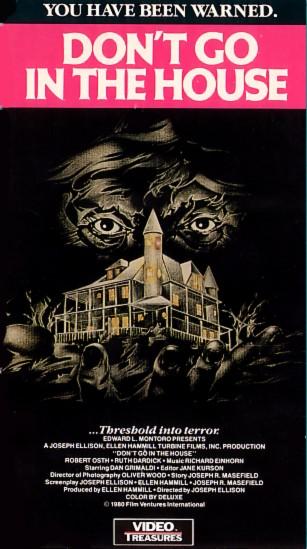 You know you want to...
If you do... then don't say we didn't warn you.
Advertisement:

Don't Go in the House is a 1980 horror film. It was released in France under the name Pyromaniac.

After his father died (or merely left) young Donald "Donny" Kohler became the subject of much abuse at the hands of his mother, an apparent religious fanatic. She would verbally abuse the boy, and repeatedly burn him when she believed he was being bad, or even just thinking about mischief. She convinced herself and Donny that she was "burning the evil out of him" and that fire was the ultimate cleanser, causing Donny to grow up with both a deep fascination with and fear of fire.

As the years pass, Donny and his mother live in a shaky state of co-dependence in their slowly rotting New Jersey home, supported by Donny's job at a garbage incinerator. Due to his upbringing, Donny is a meek, awkward, and submissive shut-in. The closest thing he has to a friend is a co-worker named Bobby Tuttle, who continually tries to get Donny to be more outgoing, only to be brushed off at every turn.

One cold winter day Donny witnesses the death of a co-worker named Ben when he is engulfed in flames when a heated aerosol can explodes. Donny stands by idly instead of helping the burning man. Donny is told off by his boss for his inaction, brushes off another request for a night out with Bobby, (in an attempt to cheer him up), returns home, and discovers his ailing mother has died.

At first shocked and saddened by his mother's death, Donny soon realizes that with her gone he can now do what he wants. He finds himself receiving messages from disembodied voices, who tell him that with his mother dead, he is now "the keeper of the flame" and the one who can use it to punish "evil". At the insistence of his new "friends", Donny takes some time off from work, steel-plates one his rooms, and purchases a fire retardant suit and a flamethrower. Once he is done with the preparations, Donny uses what little charm and social skills he possesses to get a florist named Kathy Jordan into his house where he burns her to death in the steel room, keeping her charred corpse as a "guest" in his home.

His mental state deteriorates. Donny murders more women, the voices growing more insistent, and he begins suffering hallucinations of his overbearing mother. As Donny spirals, local priest Father Gerritty, who Donny confides in one day, grows worried, as does Bobby, who continually tries to get in touch with his friend.

Quentin Tarantino has apparently stated this is one of his favorite films, and one that really disturbed him when he first saw it.

If you do go in, expect to find the following: