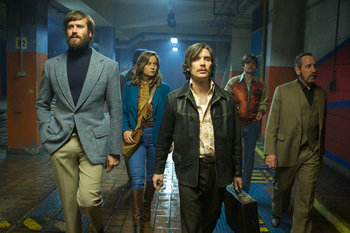 Free Fire is a 2017 British action-comedy directed by Ben Wheatley, starring Cillian Murphy, Armie Hammer, Brie Larson, Sharlto Copley and others. The screenplay is by Wheatley and Amy Jump.

Set in 1976, the film follows an arms deal between IRA members Chris and Frank with arms dealer Vernon, along with middlemen Justine and Ord, and both parties' respective muscle. When the henchmen turn out to have an outstanding dispute, the deal dissolves into a running, inept gunfight.