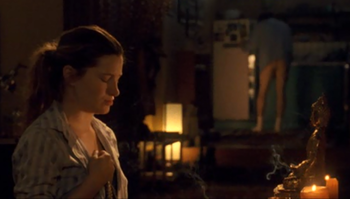 A Love Interest that at the same time manifests aspects of the archetypal sage, a wise man/woman, or a spiritually enlightened one; he or she may give the protagonist profound pieces of advice in between lovemaking.

This trope is actually Older Than Dirt, and in the earliest versions of it, it was almost Always Female: women were often seen as possessing some "natural wisdom" lacked by males (the "Witch" stock character in fairy tales is believed to descend from this "wise woman" archetype). Modern works feature Love Interests of both genders.

Compare Muggle–Mage Romance and Magical Girlfriend (which may occasionally overlap with this trope).