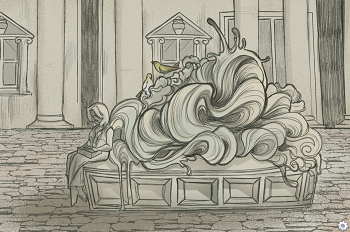 Not actually a fountain.
The Fountain is a short Kinetic Novel developed by Jeanne Foissard. It was released in 2018 for Windows on itch.io

as an entry for the TyranoBuilder Summer Game Jam 2018. The story is best categorized as Magic Realism.
Advertisement:

The Michigan-born Fine Arts student duo of Ethan and Jamie get to spend a year in Rome. While Jamie invests in getting most of her time socially, Ethan becomes obsessed with a peculiar statue of a woman supported by a raging sea. By visiting her daily, he draws the attention of the Old Lady, who knows the statue's story and is only too glad to share it. It depicts Areanna, a wealthy girl who fell in love with a leper, Luca, but had no choice but to marry someone else. She was abused during marriage and thus committed suicide. The statue is her parents' memorial gift to her. Ethan then addresses the statue with her name and it answers him. They talk, Ethan tries to find out whatever he can of Luca's fate for Areanna in the next few days, comes up empty-handed, but does take notice of the pigeons literally always hanging out on Areanna's statue. He realizes this is Luca's doing and his way of reaching out to Areanna. She cautiously agrees, at which point the statue ceases speaking but looks a lot happier than before.

The Fountain provides examples of: