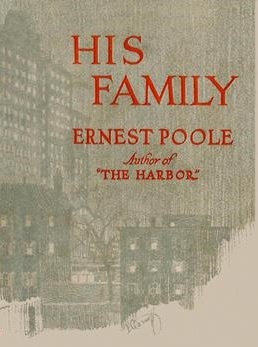 It is set 1913-15, and it tells the story of Roger Gale, a New York City businessman who runs a press clipping agency. Roger is a widower of "not quite sixty years of age" whose wife Judith has been dead for 16 years. On her deathbed Judith told him "you will live on in our children's lives", but that hasn't really come to pass, as Roger has remained rather uninvolved in the lives of their three daughters. Those daughters are:

A narrow escape from bankruptcy leads Roger to reassess his life and reminds him of his wife's dying words. After considering that his daughters are all three grown women with their own lives, Roger decides to honor his wife's dying wish and involve himself in their lives again. And so he does, learning more about his daughters and about life in a rapidly growing, rapidly changing New York.

His Family and Ernest Poole are largely forgotten today, except for one thing: this novel won the first Pulitzer Prize for fiction.