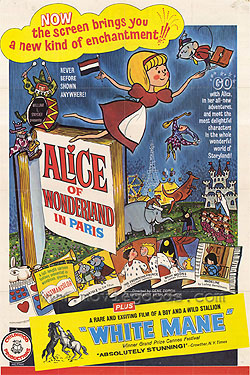 That flag... Are you sure she's going to Paris?
Advertisement:

Alice of Wonderland in Paris is a 1966 animated film all about the adventures of Alice of Wonderland towards her journey to Paris. Directed by Gene Deitch and produced by William L. Snyder, two persons known for working on some of the Tom and Jerry shorts.

It all starts with Alice reading the book, Madeline and this causes her to dream of going to Paris and meet her. What keeps her however, is to how to get there since going to Wonderland only takes a Down the Rabbit Hole but going to Paris takes, well, money.

Suddenly, François, a talking mouse riding on a bicycle, appears on a hole on the corner of her room. He tells of the great cheeses that he has tested and promises to take Alice to Paris if she tells what her favorite kind of cheese is. Along the way, they tell each other stories that are known to be famous for children. The movie tells five short stories. Two of which are from Madeline.

Alice of Wonderland in Paris provides examples of the following tropes: