Fanfic / It's a Dangerous Business, Going Out Your Door 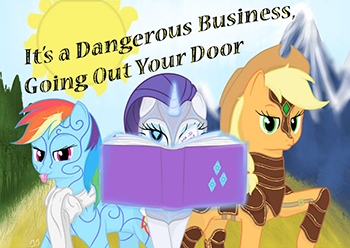 It started so simply, on what should have been a wonderful Plowpony's Day…Twilight Sparkle was just trying to help her friend Rarity learn how to teleport. But when an attempt to demonstrate goes horribly wrong, Applejack, Rainbow Dash and Rarity set out to find a way to fix her damaged horn before she runs out of time. But their quest will take them out of Equestria, forcing them to face the elements, the unknown, and their own demons and self-doubt along the way.

A My Little Pony: Friendship Is Magic Fanfic by Jetfire, It's a Dangerous Business, Going Out Your Door fleshes out the lands beyond Ponyville with a grand tale of adventure, rife with Character Development, particularly for its three heroines.

It's available on Fanfiction.net

It has a short fluffy sequel that can be read here

, as well as a full sequel in the form of Besides the Will of Evil, which can be found here