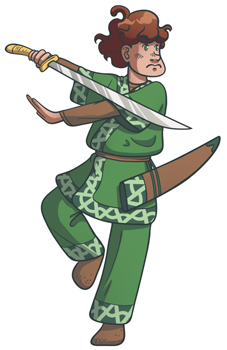 Bits Fair is a shonen-inspired fantasy/adventure webcomic. It's a fairly slow-paced story with beautiful artwork, a rich setting, endearing characters and an intriguing plot.

The first chapter starts by introducing us to the main character, Irya, who has been training hard to get to go to the Autumn Fair, but ends up failing the assessment on whether he's fit to go there thanks to a bout of stage fright. And then everything changes due to the appearance of a mysterious man who kills one of the in men the village.

The second chapter introduces us to the co-protagonists: a spunky girl named Ananda, who is being sent off to the Autumn Fair because there is nobody else to send off, and an old lady named Hira, who arrives in Ananda's village one evening and the first thing she asks is whether their village has any twelve-year-old warrior-boys.

The comic could formerly be read over at http://bitsfair.com

and it updated every Tuesday, but the domain seems to have expired.