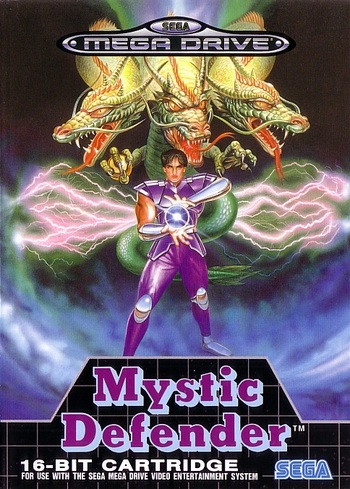 Zareth, a henchman of the evil King Zao, has abducted Alexandra, the daughter of the Supreme Deity.
Imprisoning his hostage deep in the Azuchi Castle in Japan, he plans to use the fair maiden's spirit to revive his evil master.
Joe Yamamoto, a veteran fighter who is an expert in magic, single-handedly proceeds to the castle in order to put a stop to Zareth's fiendish ambition, and to save Alexandra.
The opening Info Dump

And so begins Mystic Defender from Sega, the company's attempts to make their own version of Shinobi, with magic.

Set in an alternate version of Edo-period Japan, the player assumes the role of Joe Yamato, a ninja sorcerer (hell yes!) equally adept in ninja skills as he is in using magic. When an Evil Wizard named Zareth kidnapped Alexandra, the Love Interest of Joe, in order to sacrifice her for obtaining unlimited power, Joe must fight his way to Azuchi castle, where Zareth's lair is located, to confront him.

This game was, interestingly, originally meant to be adapted from the then-recent Peacock King, but was re-tooled into an original story by Sega via Divorced Installment. Multiple similarities between the game and anime could be seen however, from the spells to the design of enemies and the characters.

Joe, if you hope to rescue Alexandra, immediately come to Azuchi Castle!