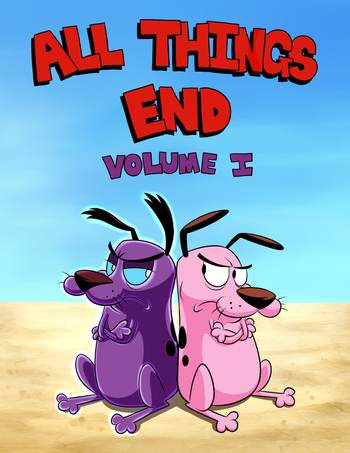 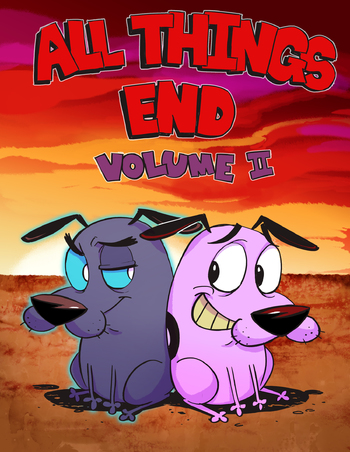 is a Courage the Cowardly Dog Fanfic written by Couragefan09. Having started in 2010, it became a bit of a long-runner, and due to how long it was getting, it was decided to spit the story into two parts. Volume I ended in 2014, clocking in at a massive 144 chapters, and Volume II started shortly after. All Things End: Volume II

can be found here and is still being updated.

When Courage finds out that he is going to be put down due to an incurable illness, he looks to his snide, ever witty computer for help. This sparks an unusual journey to a mountain that just might hold the key to curing him of his illness. Computer has no choice but to tag along as he is the only one with the knowledge to help Courage reach his goal, and he does so by taking command over the body of another dog using the ability he gained from the episode, 'Mega Muriel The Magnificent'.

Despite being at odds with each another, friendship slowly grows between the two of them over the course of their journey as they overcome one obstacle after another. They begin to learn more about each other and Computer's own history in particular starts to come to light.

There's plenty of heartwarming, tearjerking, humorous moments to be had. Though the story largely deals with darker themes and has a more realistic tone compared to the show, it's not devoid of humor. Everyone has some Hidden Depths and there's quite a bit of Character Development to be found.