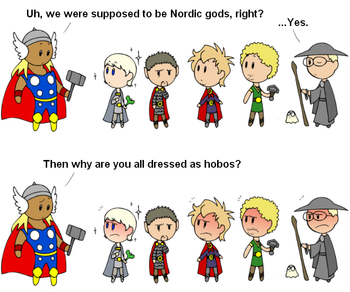 Norse Mythology, meet Marvel Comics.
"Yes, Hera, the jealous bitch-rage queen who basically embodied the female id, would know nothing about these so-called 'emotions'."
— The Nostalgia Chick, on Xanadu
Advertisement:

When the writers take aspects from an intricate mythology or religion, twist their original meaning, and use them out of context for something far from its original purpose. It can be people, places, objects, anything up to and including God. Maybe they didn't check their facts, or maybe they did after all, but they assumed (perhaps rightly, perhaps not) that they didn't need to be accurate if they were using names and figures in a new context and purpose. It's not necessarily Faux Symbolism, because often they don't even pretend to have intended some deep religious meaning behind it.

To be fair, many ancient sources don't agree on the specific interpretations of individual myths and legends, and many ancient writers would reinterpret them to prove whatever point they were trying to make. For example, most contemporary portrayals of the sorceress Medea have the deaths of her children be an accident, or a case of mistaken interpretation where the children turn out all right at the end. It wasn't until Euripides' play that Medea was turned into the purposeful murderess of her own offspring (even if she had the tiniest bit of sympathetic motivation for doing so), making this Older Than Feudalism.

This frequently happens to any god, no matter how benign, who happens to have any dominion over death or the underworld, due to Bad Powers, Bad People.

In Western media, due to the Jesus Taboo and the like, pagan mythologies are more susceptible. The Japanese, on the other hand, have no qualms about bizarre portrayals of Christianity — or Shinto, for that matter.

Sometimes this is the result of cultural appropriation where the cultural practices of one group are picked up by other people which sometimes causes myths or rituals to take on new meanings. This is one of the reasons why Our Monsters Are Different is what it is. May be accompanied by Symbology Research Failure.