Literature / Empire of the Ants 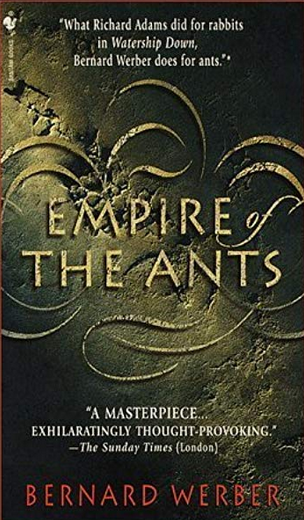 Empire of the Ants (original title: Les Fourmis) is a science-fiction book written by Bernard Werber in 1991. It got a sequel in 1992, and another one in 1996.
Advertisement:

It's about the Wells family, who have inherited a house from their dead uncle Edmond Wells, an eccentric scientist who was obsessed about ants and apparently discovered very strange stuff about them. In his will, he has left the instruction to "never ever go down in the basement".

Meanwhile, at a russet ant (Formica rufa) colony, a young male ant, 327, finds out that a whole group of ants were instantly killed under mysterious circumstances. He tries to alert the ant colony, at first suspecting the nearby dwarf ant colony, but they don't believe him. Attacked by strange stone-smelling ants, 327 allies with with a princess ant, 56, and a soldier ant, 103 683, in investigating the mysterious circumstances, and uncovers a conspiracy that goes deeper than any of them realize.

It was adapted into a Real-Time Strategy video game of the same name in 2001.

Not to be confused with (though obviously partly inspired by) the 1905 short story of the same title by H. G. Wells, in which a species of intelligent and poisonous ant is shown to be slowly taking over South America. Or the 1977 film by Bert I. Gordon about giant killer ants in the Everglades.

Compare A Rustle In The Grass, another book about a war between two different types of ant.

This book and its sequels involves the following tropes: