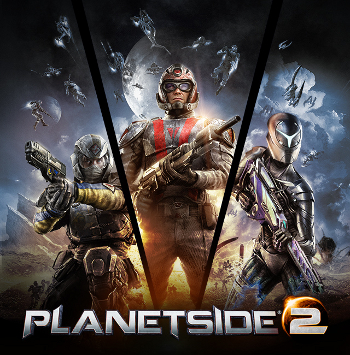 The New Conglomerate, the Terran Republic, and the Vanu Sovereignty.

PlanetSide is an MMOFPS (Massively Multiplayer Online First-Person Shooter) developed by Sony Online Entertainment (now Daybreak Game Company) and released in 2003. It is likely the second true MMOFPS ever to be released, after World War II Online (2001). The original Planetside shut down its final server on July 1st, 2016 after 13 years, ending in a final party around 'Stonehedge' on Ishundar as meteors rained from the sky, while its sequel remains active.

The plot, such as it is, involves future space-faring humans (under the banner of the totalitariannote  In the first game. In the second, the Terran Republic is a fairly benevolent entity Terran Republic) stumbling through a wormhole onto a suspiciously Earth-like planet dubbed Auraxis, and becoming trapped there when the wormhole unexpectedly closes. Cut off from the rest of humanity, the Auraxians splintered into three factions, kicking off an all-out war for control over the bases established across the planet. Advanced nanotechnology conveniently left behind by the local Precursors (referred to as the Vanu) can both reconstruct soldiers after death and fabricate an endless supply of weapons, armor, and vehicles, ensuring a state of Forever War.

At its core, PlanetSide is a skill-oriented FPS with a "territory capture" style of gameplay, featuring a large variety of weapons, vehicles, and special abilities. However, it involves much more strategy and teamwork than a typical shooter and is noticeably slower-paced. One reason for this is the scale: There are ten contested continents, each of which is a single zone (no instancing!) about 200 square miles (321 Km) in size and capable of hosting up to 133 players per faction, making for a maximum of 500. To stay organized, players can form impromptu "squads" of up to 10 or "platoons" of up to 30, and the more permanent "outfits" (equivalent to guilds or clans) can be indefinitely large and have their own ranks and command hierarchy.

Shortly after PlanetSide's release and surprisingly good reception, SOE angled for a cash-in with the game's first and only expansion pack, Core Combat. It introduced several subterranean battle zones, filled with strange crystalline structures and hopelessly confusing networks of ziplines. Capturing cavern facilities would reward your faction with "modules" that could be installed into bases on the surface, providing access to new Ancient Tech weapons and vehicles as well as some other useful benefits. While the new toys were nice, the caverns themselves were universally derided as horribly-designed combat spaces, with the end result that they were (and still are) eerily deserted most of the time.

In 2004, Auraxis went through an ill-defined process known as The Bending, causing it to be inexplicably split into a collection of small planetoids, each containing a single continent from the original Auraxis (save one, which was destroyed and replaced with four new "Battle Islands"). Later that same year, the Aftershock update was released, adding faction-specific Humongous Mecha only obtainable by Core Combat owners, and then only after an arduous cavern-oriented "imprinting" process. Notably, said mechs were rather poorly-balanced at first, accelerating the decline in subscribers that began with Core Combat's release.

The purchasable product was subsequently renamed PlanetSide: Aftershock and now included Core Combat, making it no longer possible to buy the vanilla, expansion-less PlanetSide. In 2006, as part of a limited free-play "Reserves" promotion to renew interest in the game, any pre-Aftershock holdouts who still didn't have Core Combat were given it for free. This effectively removed Core Combat's status as an "expansion", making it just another part of the game.

In 2005, as player numbers continued to decline, SOE added in-game advertising to PlanetSide, without reducing or removing the existing $15-per-month subscription fee. Despite ostensibly doing this because the game could no longer survive on subscription income alone, the move caused many a head-scratch: As a Sci-Fi game set thousands of years in the future on a just-discovered planet completely cut off from society, PlanetSide was probably the worst possible candidate for in-game advertising, to begin with. However, the ads (which have since been removed) apparently did provide enough revenue to allow the dev team to continue fixing balance issues and adding the occasional new weapon or vehicle to the game.

was announced. It's more of a Continuity Reboot than a sequel, and effectively Retcons away everything from Core Combat onward: Auraxis remains in one piece, with no confusing caverns or Humongous Mecha whatsoever. Additionally, is free-to-play

PlanetSide 2 was launched for the PC on Nov 20, 2012. It was also ported onto the PlayStation 4. It features much faster-paced combat than the original, typically compared to Battlefield 3. There are fewer continents and they are overall smaller, but are much more "dense", with more areas to contest compared to the original game. The do-it-yourself loadouts of yore (which lead to everyone carrying the exact same loadout) are replaced by a Character Class System - Medics, Engineers, Light Assault, Heavy Assault, Infiltrators and the MAX.

On May 21st, 2013, the developers awarded anyone who had ever played PlanetSide 1 or PlanetSide 2 a free 6 month subscription to the first game, in preparation for PlanetSide going free to play.

The sequel also features the "Player Studio", allowing players to create content (currently only hats, camouflage, and hood ornaments, though it's slowly being expanded) and sell it in-game for a profit (provided it's approved by SOE) ala Team Fortress 2's Mannconomy.

"All units planetside, tropes targeted near your position":