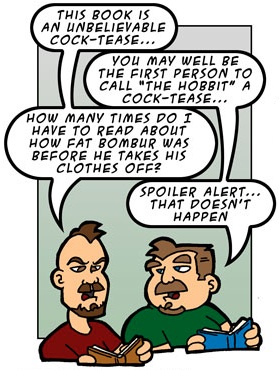 The most normal panel in the whole strip... seriously.
...Because "normal" is so "gay."

is a webcomic written by Bob Kusiak which uses the escapades of its two gay male protagonists, Rick and Drew (who are partners), to comment on popular culture, contemporary politics, and the dynamics of gay sexuality. According to the author, many of the situations in the comic are inspired by actual conversations he has with his real-life partner. Each comic is accompanied with a blog entry by the author about the train of thought that led to the comic's creation, his thoughts on recent events, messages to his readership, stories about his life, and other such things. The comic started in October 2009 and has grown in popularity thanks to links from other like-minded sites.

The element of gay chubby chasing is a big theme of Blur the Lines. Rick is a Chubby Chaser, Drew is a chub, and Kusiak is an unabashed chubby chaser himself, making Blur the Lines a clear case of Author Appeal. Even when the "more to love" demographic is not the subject of a strip, there is almost always a chubby character included. If you don't share Kusiak's taste in men, expect quite a few Squick moments from this comic strip. Even if you do share Kusiak's taste in men, the comic is decidedly Not Safe for Work and may evoke a Squick reaction in you, anyways.