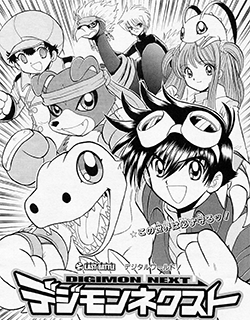 The second major Digimon manga to be produced in V-Jump, Digimon Next is a 26 chapter series that ran from 2006 to 2008. Its run coincided with the airing of Digimon Data Squad and both series shared concepts like DigiSouls, similar partner Digimon, and the same Digivices. However, Next adhered closer to the original youthful art style and themes of the first four anime series.

Doting V-Pet owner Tsurugi Tatsuno has just been introduced to the Virtual Digimon Battle Tournament by his soccer teammates. He is delighted to be interacting with his Greymon and enjoys participating in the battles. Then strange things begin to happen. Did a Kuwagamon attack Tsurugi in the Real World only for Greymon to save him or was it just a dream? Why is his former childhood friend Shou Kahara so cold and aloof? And who is the Hacker Tamer that nearly killed Greymon in the tournament?

Tsurugi and his friends soon find all these answers on a Trailmon that leads to a Digital World under siege by a Demon Lord...

See also: Digimon V-Tamer 01, its predecessor as "the" Digimon manga, and Digimon Xros Wars, its successor.

Digimon Next contains examples of: