Literature / The War of the Flowers 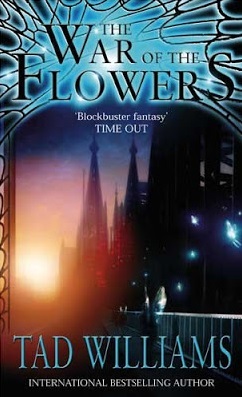 Urban Fantasy novel by Tad Williams. Theo Vilmos is the thirty-year-old lead singer of a small band in California, whose life is going nowhere until he starts getting hit by the worst string of bad luck imaginable. First his girlfriend has a miscarriage, and then she leaves him, taking the house. He's forced to move back in with his emotionally distant mother, and then she dies too, and he's forced to sell her house and move to a backwoods cabin. His only consolation is the discovery of an old book written by his mysterious great uncle, Eamonn Dowd, which seems to be part autobiography, part fairy tale and Theo entertains notions of getting published.

Then Theo is attacked by an undead horror, gets dragged into a magical world by a six-inch tall (and very foul-mouthed) sprite named Applecore, and finds out that not only is the world in Uncle Eamonn's book very real, but most of it, particularly the sinister Lord Nidrus Hellebore, seems to want him dead.

Theo travels through the strangely-modern world of Faerie, encountering along his way among others the goblin revolutionary Mud Bug Button; Poppy, beautiful daughter of Hellebore's partner in crime, Lord Aulus Thornapple; and the enigmatic Remover of Inconvenient Obstacles, who has his own stake in things that runs deeper (and closer to home) than Theo can possibly imagine ...