Literature / A Memory of Flames 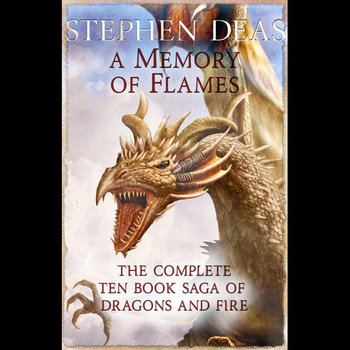 Snow: I have dreams. Memories of other lives I've lived. Many, many lives, but all of them long ago. I remember when my kind flew in our hundreds. I remember the silver gods and the very breaking of the earth itself, then a hundred lives of bright thoughts and flying free. And then, Little One Kailin, something changed, and everything since has faded into an eternal dull blur, dim and impenetrable. Out of reach. All of my kin are still sleepwalking their lives...In my dreams your kind were never anything more than prey, and your thoughts were always filled with hopeless terror. Why would you wish to return to such a world?
Advertisement:

A Memory of Flames is a fantasy series written by Stephen Deas. So far, it consists of four books: The Adamantine Palace, The King of the Crags, The Order of the Scales and The Black Mausoleum. Once, dragons and other strange monsters ruled the world and humans were simply prey. Thanks to the intervention of a mysterious figure called The Silver King, however, the dragons were tamed (read: drugged into docility) and became the cavalry of kings and queens, kept in check by a mysterious organization known as The Order of the Scales. It's been so long since dragons were free that most humans have forgotten just how dangerous they truly are.

Instead, they play games of twisted politics that would rival Niccolò Machiavelli's works. Their ultimate goal is to become the speaker—the king of kings—and reside in the Adamantine Palace. They will do anything to achieve that, including murder.

Then one day a dragon named Snow, the first perfect white to have ever been bred, escapes from captivity. Aided by a revenge-driven mercenary named Kemir, they seek to free all dragons from their slavery and return the world to its former state of dragon rule—which would be mankind's destruction.

Basically, the story is about what things would be really like if dragons were as common, powerful and intelligent as people these days would like them to be while humans made them subservient to their riders to play the Dragon Rider trope straight. Short answer? Not good.

The next trilogy "The Silver Kings" composed of 3 books: The Dragon Queen, The Splintered Gods and The Silver Kings bridge the events between The Order of the Scales and The Black Mausoleum and characters from The Thief Taker series also join the cast here.

There will be flames.