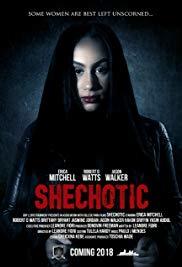 SheChotic is a 2018 American horror film.

Maxine Richards is a woman haunted. You see, her stepfather sexually abused her, and her brother murdered him. However, she developed a Split Personality in the process. Said personality laid dormant, until Maxine is cheated on by her boyfriend. The personality awakens, and manipulates and murders her way to revenge.