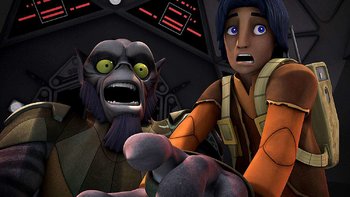 "NOOOOOOO! Not The Star Wars Holiday Special! Anything but That!"
Advertisement:

Hera, annoyed at how Zeb and Ezra are always at one another’s throats, kicks them off the Ghost. While giving them the boot she hands them a list of things they are supposed to buy, including an impossible-to-find meiloorun — a fruit not native to Lothal — and tells them not to come back until they have it. Well, one thing leads to another and Zeb ends up stealing a TIE fighter.