Western Animation / Oh No! It's An Alien Invasion 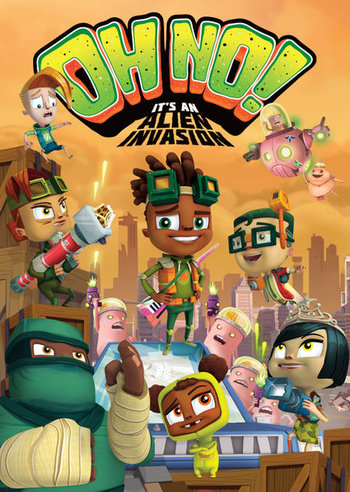 Oh No! It's An Alien Invasion.
Oh No! There's no rules, it's amazing.
So now it's time to act fast,
got a home base in this Swell-Mart 'till we get our parents back.
And now we plan our sweet attack.
We'll show those crazy Brainlings where the real party's at.
Oh No!
Theme Song

Oh No! It's An Alien Invasion is a Canadian CG-Animated Series from Nelvana that was created by Philippe Ivanusic-Vallee and Peter Ricq (both of whom also co-created League of Super Evil at Nerd Corps Entertainment) for YTV.

The Earth has been invaded by an alien race known as the Brainlings, led by their idiot manchild emperor Brainlius III and the supreme commander of his armies, Briiian (yes, that's with three i's). As part of their invasion scheme, the Brainlings have abducted all of Earth's adult human population, leaving only the children behind.

With nobody else left to fend off the aliens, it's up to the kids to fight back. Under the leadership of a young boy named Nate, the kids have taken refuge in a department store and formed a resistance team of their own known as S.W.E.E.T. (Super Wicked Extreme Emergency Team). Along with an oddball group of fellow grade-schoolers (consisting of Turret, Scoops, Shakes, Jumbo Ninja, Louis, and Lily), Nate is intent on fighting the Brainlings off the planet, as well as locating and rescuing the captured adults, most chiefly their parents.

The series ran from August 3rd, 2013, to April 30th, 2015 with a total of 40 episodes over 2 seasons. Interestingly, the show made a Channel Hop from YTV to Teletoon for its second season.

Oh No! It's An Alien Invasion contains examples of: