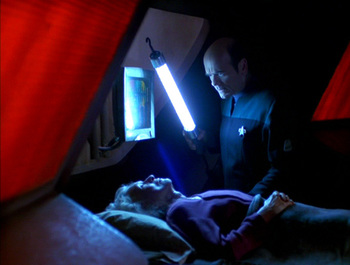 "Fortunately for these patients, I am programmed with the Hippocratic Oath."
The Doctor's program is stolen from Voyager and is taken to a world where all health care takes place within a facility that determines who gets the best care and who doesn't. Meanwhile, Voyager tracks down his kidnapper, a shifty man named Gar who has left a trail of victims throughout the area.