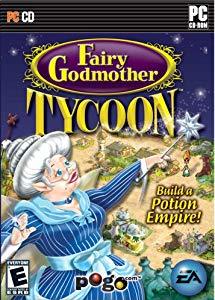 Fairy Godmother Tycoon is a tycoon-style video game, set in the fairy tale-land of Onceuponia, with a twist a la The Mafia. You play as the Fairy Godmother's new assistant, trying to help her reclaim her potion-making empire after getting stretched too thin has nearly brought it to ruin.

The game is an exercise in time and resource management. The player needs to establish branches of the potion shop in the villages throughout the realm, and monitor the daily forecast to determine which curses are going to affect the area. Purchase supplies and upgrades, create potions that will counter the curses, and sell them profitably while working to put competitors out of business.

Developed by Pogo and published with Electronic Arts, it can be found on Big Fish Games here

This video game mixes potions for: