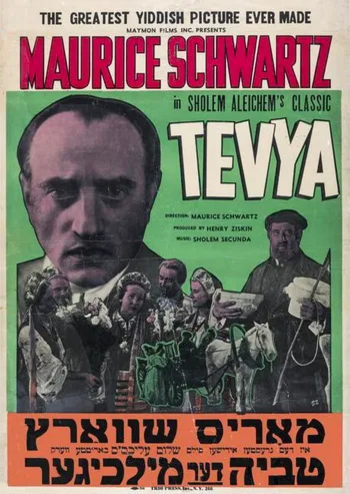 Tevya is a 1939 film directed by Maurice Schwartz.
Advertisement:

It is based on the "Tevye the Dairyman" stories by Sholem Aleichem. Tevyenote Several of the characters have names that are spelled differently in the subtitles as opposed to the main credits. The credits say "Tevya" but the subtitles in the movie say "Tevye". Similarly his younger daughter is called "Chavah" in the credits but "Khave" in the subtitles (played by Maurice Schwartz) is in fact a dairyman, a Jew living in Tsarist Russia, specifically in Ukraine, within the Pale of Settlement

. Tevye gets along fine with his Russian Orthodox Christian neighbors, but he knows perfectly well that the goyim don't really respect him and they'll turn on him on a dime. That's why he's so upset when his beloved younger daughter, Khave, falls in love with Fedye, a Christian farmboy neighbor. Tevye desperately tries to stop his daughter from turning her back on her religion and making a terrible mistake.

Despite being an American production, the film is entirely in Yiddish and Russian. The life of Eastern European Jewry that the film depicts would soon be wiped out—in fact, World War II started while the film was being produced.

Compare The Dybbuk, another Jewish film made in Yiddish at around the same time (1937) and also set in shtetl life of Eastern Europe (in this case, Poland).

The same "Tevye the Dairyman" short stories were later adopted again, into the famous stage musical and film, Fiddler on the Roof.