Film / Susannah of the Mounties 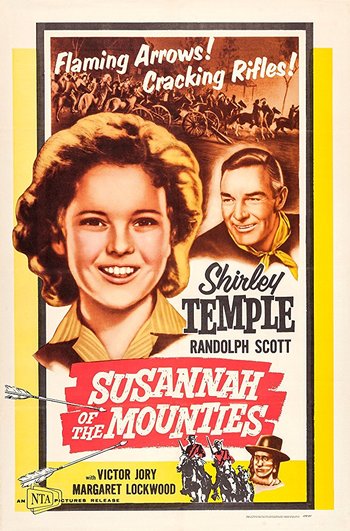 Susannah of the Mounties is a 1939 Western film starring Shirley Temple. It was based on a 1936 children's novel of the same name.
Advertisement:

On the nineteenth-century Canadian frontier, there has been an uptick in Indian attacks against the white settlers. Susannah "Sue" Sheldon (Temple) is the only survivor of an attacked wagon train. She is found and adopted by the Mounties, specifically Angus "Monty" Montague (Randolph Scott) and Pat O'Hannegan (J. Farrell MacDonald). At the same time, Vicky Standing (Margaret Lockwood), a Proper Lady from back east, has come to visit and charms all the Mounties, especially Monty. Sue is terribly jealous.

Meanwhile, the local Indian chief, Big Eagle (Maurice Moscovitch), tells the Mounties that he knows nothing about these attacks on the settlers, but promises to look into it. As a token of friendship, he leaves his son, Little Chief (Martin Good Rider), behind with the Mounties. Sue and Little Chief befriend each other, but will they also be able to bring their respective communities together?

This was Shirley Temple's last financially successful film with 20th Century Fox, and thus may be considered the official end of her "child star" career.