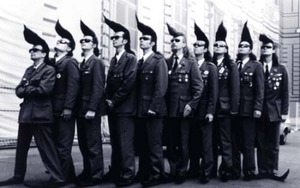 The Leningrad Cowboys are a novelty classic rock / oompah band from Finland, who famously appeared in Aki Kaurismäki's Leningrad Cowboys Go America playing themselves on a disastrous This is Spın̈al Tap style tour of America after the fall of the Berlin Wall.

The Leningrad Cowboys is noted "for its humorous songs, ludicrous hairstyles and concerts featuring the Russian military band Alexandrov ensemble". In the film, we find out that their dog has the same haircut.

They also produced a concert film in 1993, Total Balalaika Show.

Thank you very many!