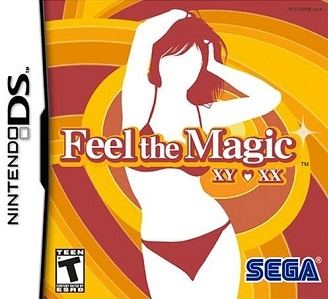 What are Feel the Magic: XY/XX and The Rub Rabbits!? The simplest explanation is that these are two games devoted to Love at First Sight, even coming across in the Japanese titles (Kimi no Tame nara Shineru [I Would Die For You], and Aka-chan wa Doko Kara Kuru no? [Where Do Babies Come From?]). In both titles, your character falls completely head over heels for a girl and, with the help of a group known as the Rub Rabbits, sets about winning her heart by impressing her. Which brings us to the more complex explanation.

When Nintendo released the Nintendo DS in 2004, Sega's Sonic Team was one of the companies most excited about its features, and they eagerly set up the new IP Feel the Magic (then known as Project Rub, its eventual EU title) to demonstrate the system's capabilities. The result was a Minigame Game heavily similar to WarioWare, based entirely around the touch screen, microphone, and dual-screen setup. With the new IP came the ability to get as crazy as they wanted, and boy howdy, did they ever take advantage of that.

The Rub Rabbits! followed two years later after Feel the Magic's quirky humor and gameplay proved it to be a Cult Classic, but probably due to the increased popularity of the DS making its features less novel, Sega has effectively put the fledgling franchise to pasture ever since, save for the occasional nod in later unrelated titles.