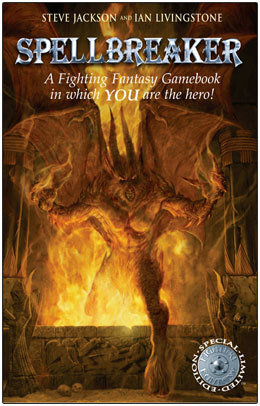 When I said that this was gonna be one Hell of an adventure, I meant it...
Advertisement:

Spellbreaker is the 53rd entry in the Fighting Fantasy series of gamebooks, written by Jonathan Green.

It all starts in a dark and stormy night: you're a mercenary warrior on a pilgrimage to Hallow's Well in Ruddlestone, your homeland, when you run across a mysterious stranger at a campfire. After some talking, you decide to travel with the young man towards Rassin Abbey, where you can safely spend the night. After a shocking encounter with some demons, you and the stranger arrive safely in the Abbey, where you prepare to sleep safe and peacefully but... it turns out that your travel companion wasn't what he seemed. You're suddenly awakened by a ruckus in the Abbey's library, where you find some dead monks and the stranger clutching a massive black book in his grasps, sarcastically thanking you for your help before unleashing a Demon. After dispatching the beast, you learn that the stranger, the sorcerous Nazek, has stolen the Black Grimoire, an eldritch tome of Black Magic he plans to use to unleash the Kurakil, the Infernal Beast imprisoned inside the Casket of Shadows in the village of Claysburg. Such ritual can only take place in the night of Shekka's Moon, four nights from now. Knowing very well that it's your fault if Nazek stole the Grimoire, you must undertake a perilous journey across the infested land of Ruddlestone, fighting the infernal spawn summoned by Nazek and stopping the demonic Kurakil once and for all.

Spellbreaker was the first work of Jonathan Green, and features an immersive, well-descripted world coupled however with a narrow, difficult path sprinkled with mandatory items, plenty of tests and hard combat situations you can find yourself into. Aside from the three basic scores you also have a score of FAITH, which will help you on your quest against the demonic forces summoned by the evil Nazek.

No relation to the final game in the Enchanter series.