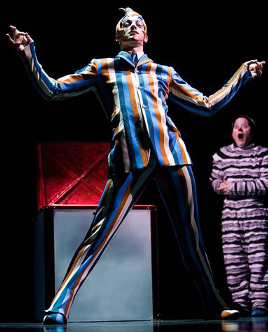 The story opens with a shy, inept man known as "The Innocent" trying and failing to fly a kite. His efforts are interrupted by the delivery of a large jack-in-the-box addressed to him. When he opens it, out pops "The Trickster", a smooth, sophisticated, cucumber-cool fellow in a nice suit who has arrived to transport our protagonist, via a Magic Wand, to a goofy clockwork kingdom filled with colourful individuals. What ensues is an adventure that will teach the hapless fellow of the possibilities that come with confidence and imagination.

KOOZA — the title is a Sanskrit word that can mean "box" or "treasure" — is something of an Adaptation Distillation of Cirque. In the years following the company's breakthrough tours Le Cirque Reinvente and Nouvelle Experience, the themes/concepts, characterizations, etc. of their shows became increasingly complex and elaborate. By contrast this show is a deliberate throwback to the early tours with only a handful of characters to follow and an plot that is much the same as the aforementioned two, that of an ordinary person (or people) transported and transformed by magical beings and thus enlightened to the wonders of whimsy. In fact, director David Shiner's previous work with Cirque was creating the clown acts of Nouvelle Experience and playing The Everyman protagonist during the first leg of its tour.

With the framework in place, the focus of this show is on the acrobatics and clowning that made the company famous, simply and cleanly presented. It was filmed for TV and DVD during the 2007 Toronto engagement.