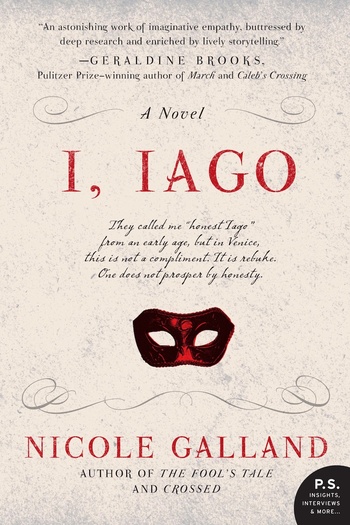 They called me "honest Iago" from an early age, but in Venice, this is not a compliment. It is rebuke. One does not prosper by honesty.
— Iago Soranzo, "Prologue"

I, Iago by Nicole Galland is a punished fanfic of Shakespeare's Othello. The first half of the book ("Before") starts with Iago as a boy, and follows him through to minutes before the action of Othello begins. The second half ("After") deals with the events of the play.

Since childhood, Iago has been naturally blunt and honest. Unfortunately for him, he is living in Renaissance Venice, in a culture that's not big on honesty. As a child, his honesty is discouraged by his cold father. As a young man, his honesty is delighted in, and seen as an exotic novelty. He is so well known for it, that by the time he starts lying, people believe him unquestioningly.