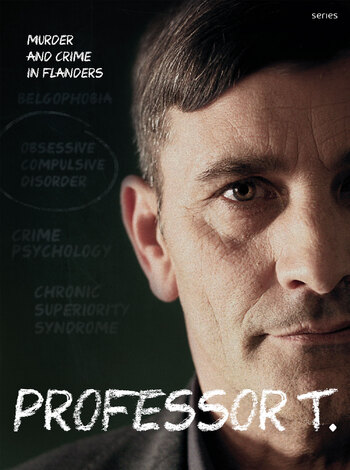 The modern day Hercule Poirot, although he doesn't like to be called that.
Advertisement:

Jasper Teerlinck is a brilliant professor in the field of psychological criminology, as well as one of the more popular lecturers at Antwerp University. He's an eccentric man, however, who almost completely lacks any social skills and trades in common social conventions for telling people the (harsh) truth straight to their face, regardless of who they are. This has left him with a (very) selective group of people who can stomach his eccentricities on a daily basis. When a young female student gets raped on campus, the professor gets called in by federal inspector Annelies Donckers, one of his former students (and a secret admirer of his). She sees a connection between the current rape case and a cold case from ten years ago. While Professor Teerlinck initially isn't very keen on helping his former student, he eventually relents and becomes an advisor for federal police in Antwerp. There, he's confronted with a variety of interesting (and complicated) criminal cases, which he tends to use as (examples of) case studies in his lectures.

Besides Annelies, the professor is supported in his investigations by Daan de Winter, Annelies's partner, Paul Rabet, the DCI who's in charge of Annelies and Daan (and who initially hates the professor's guts), and Christina Flamant, the team's commissioner and an old flame of the professor. Both Daan and Annelies eventually leave the team and are (respectively) replaced by John van Humbeek, former gendarmerie, and Saskia Vogels. On the academic side, Professor Teerlinck gets help from miss Ingrid Sneyers, the faculty's head secretary, and Walter de Paepe, the faculty's dean (and a bit of a father figure to Jasper). He furthermore gets regular visits from his mother, Adelinde van Marcke, who tends to be both overprotective and under-involved with her son.note as the professor so eloquently states

As the series progresses, both Professor Teerlinck and the viewer find out more about the professor's eccentricities and their root cause, which lies with the death of his father. Furthermore, the professor seems to be affected mentally by the cases that he helps solve, much to his own distress. This eventually leads to his voluntary admission in a mental institution, for awaiting (and nearly undergoing) his own murder at the hands of a psychopath. After his release from the institution, Professor Teerlinck (rather unwillingly) continues to visit his psychiatrist, dr. Helena Gijselbrecht, who tries to work with him on conquering his phobias (his germophobia in particular). This all ends when Professor Teerlinck ends up shooting a (corrupt) DCI as a means to protect Christina, with all of the unpleasant consequences. Nevertheless, Professor Teerlinck continues to solve cases, even from his jail cell, and is eventually acquitted. After his release from jail, Jasper decides to face his demons once and for all and starts an investigation into his father's death, which lead to rather astonishing developments.

The series itself is quite comparable to other crime dramas that involve academic advisors, such as Perception and NUMB3RS, but adds quite a bit of humor as well. The series shows the clearest comparison with Perception, however, as Professor Teerlinck is prone to seeing things that aren't real, similar to Daniel Pierce. It ran for a total of three seasons and was immensely popular in Flanders. Moreover, several foreign adaptations of the series have been developed under the same name. It aired on Eén in Flanders, RTL Crime in the Netherlands, Channel 4 in the UK and PBS in the US.