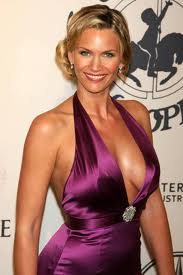 Natasha Henstridge (born August 15, 1974 in Springdale, Newfoundland and Labrador) is a Canadian model and actress.

She first became famous for her role as frequently naked human-alien hybrid Sil in the very successful film Species. She's since gone on to appear in two other movies from the Species series, The Whole Nine Yards, The Whole Ten Yards, Steal, Ghosts of Mars unfortunately and the TV series She Spies and Eli Stone.

She provided the voice of the substitute teacher in the South Park episode "Tom's Rhinoplasty", being credited as "the chick from Species". She also appeared in The Outer Limits (1995) episode "Bits of Love" as Emma.

She is not related to British actress Elizabeth Henstridge.