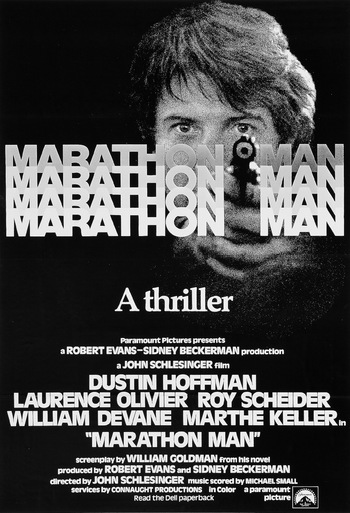 "Is it safe?"
Advertisement:

Thomas "Babe" Levy (Hoffman) is a history graduate student and aspiring marathon runner who seeks to follow in the footsteps of his father, a historian who committed suicide after being unjustly targeted by Joseph McCarthy. He receives a visit from his brother Henry "Doc" Levy (Scheider), who—unbeknownst to Babe—is employed by a secretive U.S. government agency managing a Nazi war criminal, Dr. Christian Szell (Olivier). Babe soon finds himself entangled in events, and must fight to save himself from Szell and his allies.

A very surrealistic sequel to the novel, Brothers, was published several years later.

Not to be confused with Stephen King's The Running Man, another bleakly political novel turned into an iconic film— which takes its title much more literally.