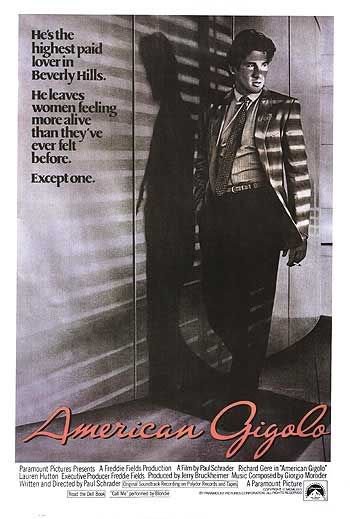 American Gigolo is a 1980 film written and directed by Paul Schrader.

Julian Kaye (Richard Gere) is that rarest of rare things: a male prostitute who services women. Julian is a $1000 per night hooker who pretends to be a chauffeur and/or translator but instead brings sexual pleasure to the rich ladies of Malibu, Beverly Hills, and the rest of the Los Angeles uppercrust. One evening he meets Michelle Stratton (Lauren Hutton) at a swanky LA restaurant and mistakes her for his client of the evening. Michelle wasn't his client, but when she finds out what sexy, mysterious Julian does for a living she's intrigued. She find him again and pays for his services. Soon, they are falling in love.

Meanwhile, Julian is sent out to the Palm Springs home of one Mr. Rheiman and his wife Judy. Mr. Rheiman wants Julian to have sex with his wife, he wants to watch, and he wants Julian to hit Judy. Julian does not like that last bit, he being in the business of romantic pleasure and not "kink" like sadomasochism. We never do find out if Julian hit Judy or not, but a few days later, Julian reads in the newspaper that Mrs. Rheiman was murdered. Soon Detective Sunday from LAPD Homicide (Héctor Elizondo) is nosing around and asking questions. A horrified Julian soon realizes that he is being framed for murder.

Giorgio Moroder composed the music. The song "Call Me", composed by Moroder and Debbie Harry and performed by Harry's band Blondie, became a massive hit single.