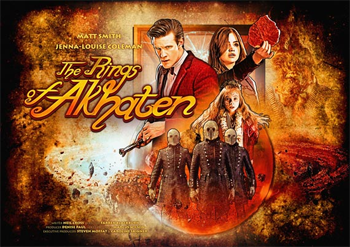 So, about that leaf...
"There's quite a difference, isn't there, between what was and what should have been. There's an awful lot of one, but there's an infinity of the other."
— The Doctor
Advertisement:

The superbly sentimental one. Which also happens to be ham-tacular. Ham that's sugar-cured with singing.

The first broadcast Doctor Who episode by Promoted Fanboy Neil Cross, who got the job by mentioning Doctor Who for years in every BBC meeting.

The Doctor quietly watches (and reads The Beano) as Clara's parents meet for the first time. A leaf blows into Clara's dad's face and he stumbles into the road, where her mother saves him from being hit by a car. The two fall in love, become Clara's mother and father, and raise her with kindness and sweet stories. The Doctor is always there, just to watch her grow up. When Clara's mother dies, the Doctor is there at the graveyard, just looking at the scene from a distance. Clara is, for all intents and purposes, a completely normal human being, but this is not the case. "She's not possible!" the Doctor declares.

On the day after her previous adventure, the Doctor arrives to come pick Clara up. Clara wants to see "something awesome", so the Doctor whisks her off to the gorgeous inhabited rings of the planet Akhaten, where the Festival of Offerings is in full swing. Wandering off at the marketplace, Clara meets Merry, the very young Queen of Years, as the pilgrims and natives prepare for the ceremony. Merry is terrified of her role as a ceremonial singer, thinking she'll screw up despite having been extensively taught every song and story known to her culture. Clara encourages her to go through with it, remembering how her own mother raised her to be courageous, and Merry agrees to perform the hymn for "Grandfather", the old god. However, said god very unexpectedly interrupts little Merry's song and drags her through the air towards its tomb. The Doctor and Clara stop being tourists and leap into action, following suit on a space motorbike.

The Doctor sonics open the tomb door and Clara calls for Merry to join them but she refuses. The Doctor is thus forced to seal himself, Clara, Merry and a monk (frantically singing sacred lullabies) in together with a tremendously scary mummified vampire, who wakes up and starts attacking its own cage. Merry insists on making a Heroic Sacrifice and letting it feed on her memories — all the songs and stories she's been taught are for this purpose. The Doctor refuses to let her do this and explains to her the sheer improbability of someone as unique as a living person being born in the first place (glancing at Clara while he talks) and the pointlessness of sacrificing something as beautiful as her own life.

Merry is still intensely scared, and she fully blames Clara for convincing her to go through with the ritual, even though no one knew it would lead to this. While Merry uses her knowledge of her culture's lore to improvise an escape, the thing breaks through its glass and lets out a shrill yell, which triggers a beam that makes contact with the planet, after which the mummy falls unconscious. As it turns out, the mummy isn't the Old God. It was the Old God's alarm clock. The Old God is the entire planet.

The Doctor asks Clara to get Merry to safety on the air bike, while he stays behind to confront the living, monstrous planet. Merry takes up her old spot on the ceremonial dais again and begins to sing, hoping to calm the beast. The Doctor exposes himself to it, voluntarily letting the thing Mind Rape him and show it every single one of his memories: the Time War, the beginning of life and its ending, the death of entire universes. Entire worlds that laughed in the face of physics and relied on the mind of a madman. The monster isn't quite sated yet, so while the Doctor, crying by this point, struggles to keep standing up, Clara rushes back into the tomb and offers the monster her leaf: not just its memories, but Clara's grief at what might have been if her mother hadn't died. Since the thought of innumerable possibilities is stronger than even the Doctor's 1200 years of life, the planet gorges itself on Clara's grief and dies.

In the aftermath, the Doctor explains that Clara reminds him of someone who died. Clara tells him she won't be a Replacement Goldfish for whomever it is he lost, not realising that he's talking about her.

Alternative Title(s): Doctor Who S 33 E 07 The Rings Of Akhaten