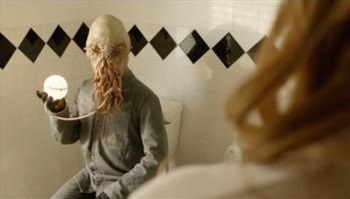 "Ood on the loo."
Advertisement:

The one where Amy has a breakdown.

April: The Doctor leaves a voicemail for Amy and Rory's home phone. So far, he escaped from the Sontarans through surfing on lava, met Mata Hari, and made a rap record. The call ends with the Doctor having the usual TARDIS issues.

Then Rory and Amy have a drink like they're playing some kind of drinking game with their voicemail...

June: Rory is about to go to the bathroom but finds something inside there. After a double take, Amy walks in to the hallway. The two of them look inside. It's an Ood!

July: The Ood continues to live with Amy and Rory as their butler. The Doctor promises he'll come pick it up eventually, but first he has to deal with the TARDIS about to implode.

August: The Doctor calls the Ponds to say he picked up the Ood and that he popped round for a visit, but they weren't home. He tells them to call him if they need him, but ends up deleting the message right before Amy comes back to an empty house. Flashback to Rory leaving in anger after the couple had a big argument.