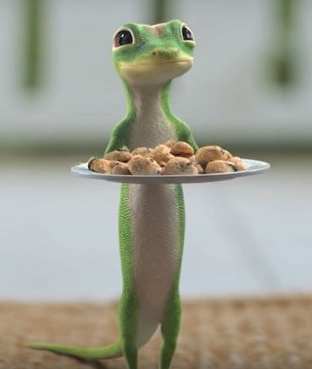 Always there for you with cookies and car insurance promotion!
The common view is that Reptiles Are Abhorrent. They're scaly, inhuman, and to some people, creepy... but some can be cute.
Advertisement:

For a number of reasons, lizards tend to be regarded as some of the cuter reptiles. They're small with big eyes, traits that humans instinctively find endearing, and most are non-threatening to humans. Sure, some species of lizard can still seem creepy, but if you look closely, you can find some of the same qualities in them that make other animals endearing.

This perceived cuteness often leads to lizard characters being kindhearted and/or heroic, more so than other reptiles like snakes and crocodiles. Geckos and chameleons are the most commonly-used lizards for this trope, due to their small size and being among the cutest of lizards. Exotic-looking lizards such as iguanas, frilled lizards, bearded dragons, basilisks, horned lizards, and thorny devils are also popular choices, though they still have their share of negative portrayals as well. Monitor lizards, being the largest, scariest, and least "cute" of the lizards, are rarely portrayed this way. Gila monsters are also usually portrayed negatively due to being venomous and scary-looking. Skinks, despite being smaller, are also not likely to be portrayed as this due to looking "generic" and therefore creepy. And good luck finding a legless lizard — nobody can tell them apart from those awful snakes.

May or may not be Lizard Folk. May overlap with Hollywood Chameleons, especially in kids' shows where they make for brightly colored and charming sidekicks. Related to Wise Old Turtle, another common aversion of Reptiles Are Abhorrent. See also Delightful Dragon and Shoulder-Sized Dragon for this trope with wings.